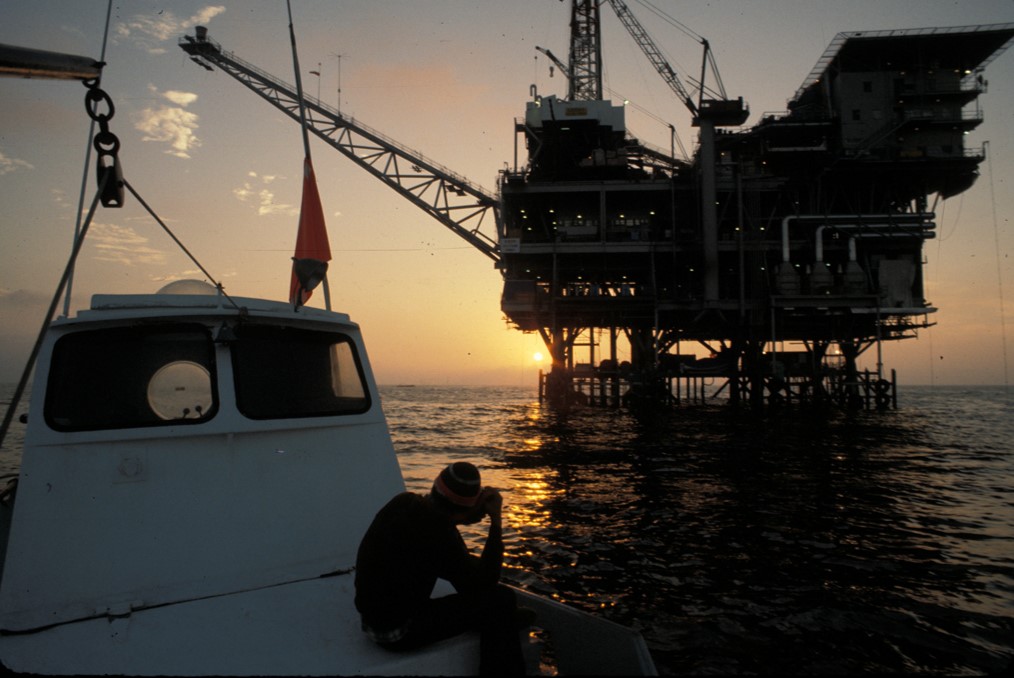 It’s 1974. Andy and I had just finished college, Brooks Institute of Photography (which in 1996 awarded Bob Evans an Honorary Masters of Science). We had exhausted just about every possible photographic view of the California Channel Islands from our 35’ Research Vessel Haik. Shane Anderson, whom many know from UCSB where he was the Collector/Naturalist for the Biology Department, was working for Western Marine Laboratories. Shane suggested we take a look at the offshore oil platforms of the Santa Barbara Channel. Wow!

Hillary Hauser, then writing for “Skin Diver Magazine,” joined us for dives. Together we published many articles and “The Living World of The Reef.” Hillary introduced my work to Willard Bascom with Southern California Coastal Water Research Project (SCCWRP), who with John Isaacs of Scripps Institute of Oceanography and others was conducting research on the biology of the offshore oil platforms. They hired me as their Chief Photographer. Scientific publications followed. 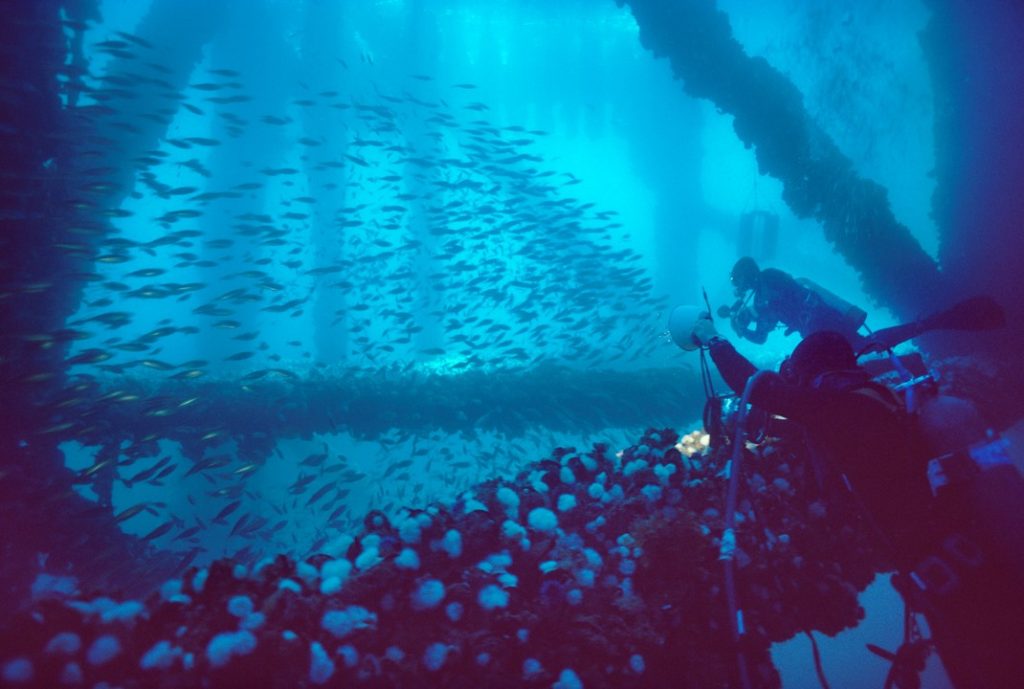 Imagine being 27-years old, and spending your days diving with friends. Your own 35’ Research Vessel moored next to these massive jungle gyms, blanketed with marine life and schooling fish. Our playground was unique. Magazines and scientific journals published our stories and my photographs. That’s how we funded our grand adventure. By selling photographs and stories to Time Life, National Geographic, International Wildlife, Tierwelt and others.

Much of our equipment was not available off the shelf. Jack Mardesich of Jay Mar Engineering, San Pedro, with SCCWRP built our lighting and time lapse systems. Our wetsuits were custom made by Don Ducket of Divers Den, Santa Barbara. I designed and built buoyancy controlled submersible and towable camera systems and housings to protect the cameras from pressure at depth.

In 1977, D.I. Bolding, Public Relations Director for Exxon, showed up at our Santa Barbara Funk Zone warehouse. He asked us to photo-document the marine ecosystem as it developed beneath Platform Hondo. Platform Hondo was newly installed in 1976 in 850 feet of water, 5 miles off the Gaviota Coast.

We had logged many dives photo-documenting beneath Platform Hilda, Hazel, Heidi, Hope and Hogan, all decommissioned in 1996. (Decommissioning means removal. With the oil rig jacket, an estimated 4,000 tons of marine life were killed and disposed of in a land fill.) Of the platforms we dove, A, B, C, Grace and Holly remain. Each has its own unique ecosystem, which was established before we were allowed to photograph.

Platform Hondo was new. The structure was bare. We installed camera mounts to photograph from a consistent view. First to grow were the California Mussels, the spat of which had attached itself to the oil rig during transport from the shipyard. Everything else followed. Brittle stars competed for space. Juvenile fish of many types appeared in the marine matrix. Deep sea Baccacio Rockfish hovered at 120-foot depth. That was as deep as we dove on Platform Hondo.

Santa Barbara Journalist Vic Cox reported on our project. In 1983, Atlantic Richfield Foundation funded our multi-media show “Man Made Oases,” viewed by millions at the Cabrillo Marine Museum for the County of Los Angeles. It introduced the public to the concept of offshore oil platforms becoming reefs.

With the Marine Megatropolis established beneath the offshore oil platforms of the Santa Barbara Channel for more than 50 years now, we no longer call them “artificial.”

From 1974-1981, I logged around 850 dives photo-documenting life below the offshore oil platforms of the Santa Barbara Channel. I accumulated a photographic collection which includes thousands of 35mm Ektachrome and Kodachrome slides, and 7,000 feet of 8mm and 16 mm film. I could do this only with the assistance of those mentioned throughout this Exhibit, Jocelyn G. Kempe, Robin Simpson, and too many others to list, who are all in my memories and heart.